Introduction to a discussion series on workers’ political autonomy

We want to start a local discussion group in Bristol, on the question of working class autonomy – as part of a more general process of getting organised and practical intervention. The initial focus will be on the struggles and theoretical efforts in Italy in the 1960s and 1970s – below you can find a short introduction. From there we will move back and forth in space and time and discuss other relevant experiences. These will be face to face meetings in a relaxed atmosphere, as we are sick of Zoom. If you are interested in participating, drop us a line: angryworkersworld@gmail.com

Why walk over old ground and look for clues in the distant past of the 20th century? In the following summary of workers’ struggles and working class political and theoretical developments in Italy in the 1960s and 1970s, we highlight some tendencies and characteristics of this cycle of struggle that we feel are still relevant for us today.

The situation in Italy after World War II allows us to understand the relation between objective changes in the organisation of exploitation and the subjective expressions of the working class. The rapid economic development, the internal migration, the proliferation of assembly line work, the expansion of the university system in the 1950s and 1960s, all clashed with the material basis of the traditional working class movement. These were the artisans and skilled industrial workers of the towns and the small peasantry and the attached agricultural labourers in the countryside, which formed the core of revolutionary syndicalism and the PCI (Italian Community Party).

This rapid pace of development, the depth of the subsequent political crisis and the emergence of new types of struggles in the early 1960s pushed a few dissident comrades to discuss new political concepts. The concepts of workers’ inquiry and class composition emerged, as a method to understand changes of the relation between workers and capital and as a strategic reading of how the mode of production and mode of struggle were related. This process required discussing and surpassing the contemporary bourgeois sciences, such as sociology or anthropology. It included questioning what the official organisations of the working class said about technology and state planning. The question of ‘revolutionary organisation’ could then be reconsidered on the basis of actual class relations, rather than ideology.

This process meant that the comrades were open towards the new forms of struggle that emerged from the mid-1960s onwards: from assemblies, factory-internal marches, chessboard strikes to violent street fights. Here we can emphasise the new relationship between students, technical workers and mass workers during the struggles after 1968. While in most other countries ‘1968’ witnessed mere ‘alliances’ or an ‘external’ joining of forces between students and workers, in Italy this relation went deeper. Student-worker assemblies became an actual form of organising struggles, which overcame the separation of knowledge: students learnt about the factory reality, workers about what was happening in the world of academia and student freedom. More importantly, this process infected and radicalised technical ‘white-collar’ workers, former students at technical colleges, who joined the new and egalitarian strike movements. ‘Qualification’, ‘skills’, ‘professionalism’, ‘experts’ were questioned on a much deeper level as part of the hierarchical production process.

The focus on the ‘new mode of exploitation’, rather than on the terrain of electoral or other forms of classical politics also meant that the efforts of the comrades had an international character. Early on, comrades tried to understand the struggles in other western European and American industrial centres, which were equally characterised by migration and subsequent struggle of the new workers against both factory system and systemic discrimination, from the black workers in Detroit to the ‘Turk strikes’ in Germany in the early 1970s.

The increasing female participation in both wage work and higher education and the crisis of traditional hierarchical form of politics created the basis for a new form of feminism that was more closely related to working class reality. The modern debate about the relation between domestic and social reproduction and capitalist exploitation has its origin in Italy in the 1970s. The debate back then was part of a material fight against legal repression around abortion and marriage, against sexist divisions on the shop-floor and male domination in the political organisations. In this sense it was miles apart from contemporary identity politics.

The division between factory and other aspects of working class life was also questioned by the newly emerging ‘political workers’ committees’, which used their cohesive power on the shopfloor to lead campaigns for free public transport, housing occupations and reduction of prices in supermarkets, cinemas or of energy bills. For us, the political committees are still the most advanced forms of working class autonomy. At this point the movement threw up a major question: what does revolution mean in modern capitalism? Instead of storming the Winter Palace, the movement in Italy had undermined power and appropriated both time and material resources for itself: factories and universities were opened up for others; foremen and bosses’ commands were ignored; working time was reduced not (only) by legal decree, but by using the time at work collectively for both enjoyment and organisation of struggle; wages increased beyond productivity rates; mass occupations questioned private property rights; reappropriated spaces were defended collectively and violently.

If the class movement reformulated the question of revolution in a modern context, the state and the ruling class were forced to develop new means of counter-revolution. We will find hardly any richer historical excavation sites to understand the various means of modern counter-insurgency than Italy during the 1970s.

The so-called ‘strategy of tension’ might be the most known one, but is perhaps also the most obvious and, despite all conspiracy, the easiest to understand, at least in hindsight. The nexus of the party system, the deep state and fascists tried to blame massacres on the radical wing of the movement, while at the same time attacking the movement’s infrastructure, such as workers’ centers, newspapers, independent radios, squats. More difficult to understand is how the movement’s reaction to this could be turned into the more effective form of counter-insurgency: anti-fascism and armed struggle. The spectre of a coup tied larger parts of the movement back to the old organisations of anti-fascism, such as the PCI, and new electoral adventures to ‘defend democracy’. The dead-end of armed struggle is more difficult to understand, as it was not only based on the myth of the Stalinist anti-fascist history of the partisans, but at least initially deeply rooted in the collective self-defence of the movement in factories and working class areas.

The more subtle form of counter-insurgency was a combination of repression and incorporation into reformed structures of representation, both within companies and wider ‘civil society’. While management tried to isolate rebel workers or students through suspensions or internal relocations, they also offered new avenues of conflict mediation, such as a reformed trade union and factory delegate system from the early 1970s onwards. While some saw this as a gain of the movement and a basis to expand and ‘institutionalise’ workers’ power, others saw it as a fatal embrace. The vanguard of the working class at the time, for example FIAT workers during the 1969 strikes, had claimed that ‘we are all delegates’ – the new institutionalised delegate system definitely undermined this spirit. At the same time it led to an increase in workers’ confidence in smaller companies which had been left relatively untouched by the ‘Hot Autumn’ in 1969. No wonder that the ‘question of the delegate’ was the most contentious one within the radical milieu at the time.

Mere legal reforms cannot explain the fundamental character of the counter-attack. It was the 1973 global crisis and the way that the state and companies made political use of the crisis that ran like acid through the class, undermining previous collective strongholds and giving material clout to the ‘reforms’. Again, Italy is quite exceptional in the sense that this process of undermining workers’ collectivity took much longer. Still, by 1977 the character of the ‘class movement’ had changed drastically. The relation between the productive power of the working class and the collective character of the street protests during the upheaval in 1977 was much more difficult to decipher. This led to two knee-jerk reactions amongst comrades: some discarded the protests as counter-culture, while others saw them as proof that the working class had finally dispersed into the territory of the multitude. Only a minority of comrades tried to understand the deeper changes and to discover the productive fabric that connected protest to a changed form of daily exploitation. If we look at recent waves of protests, from the so-called Arab Spring to Black Lives Matters, we can see that this task is still with us today.

We think that the main ability we can still gather from this long cycle of struggle is to think about class struggle in strategic political terms. The comrades can encourage us to look much deeper into the productive fabric of society, the contradictions of cooperation at work, the biographical and emotional backgrounds of workers, the technocratic tactics of the political regime, the advanced and regressive aspects of a concrete struggle, the limits and potentials of an intervention as a minority. We can discover that strategy is not just a political art form, but collective joy.

We will chose relevant texts and historical documents to discuss the following main topics:

This is an open process and we, as participants, can explore other questions if we find them interesting and relevant. 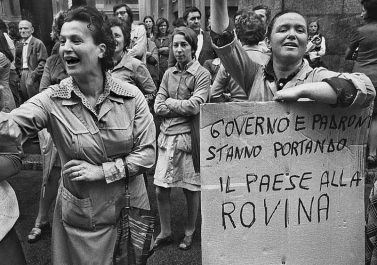 Introduction to a discussion series on workers’ political autonomy

We want to start a local discussion group in Bristol, on the question of working class autonomy – as part of a more…