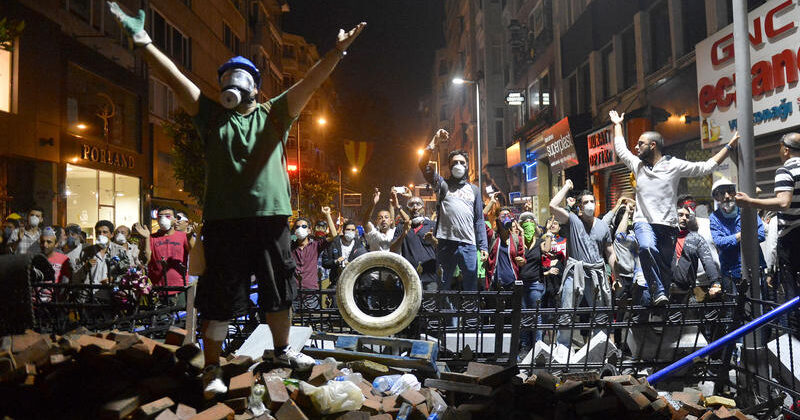 This report is part of our internationalism series:

I was living in Berlin when the Gezi Park movement began in Istanbul at the end of May 2013. I first became aware of what was happening from bits and pieces in the news, but then a meeting was called by comrades from Turkey, which I went along to to find out more. I remember it being a packed event, standing room only in the back room of some sweaty Kreuzberg bar, as we got a first-hand account of the exciting developments happening there. What had started as a small occupation against the development plans for the park in the middle of the city, had quickly turned ugly as protestors were forceably and violently evicted by the cops. As more protestors joined in, the violence from the state continued to escalate, and this event became the spark that ignited a massive movement that engulfed large parts of the country. Three million people took to the streets over a three week period, angry about state violence, and the generally authoritarian tendencies of the regime of the President Tayyip Erdogan.

In 2013, the ‘street protest’ phenomenon had been in full swing for a couple of years. Starting from Tunisia in December 2010, and spreading to Egypt, Syria, Libya and Yemen in 2011, this seemed like another such ‘middle-eastern moment’ where the masses were rising up and attempting to topple their shitty governments. However, at this stage, after we had seen the waves of state violence and repression that had crushed and killed so many in these countries, along with new government faces but not necessarily any systemic changes, the limitations of such movements was glaringly apparent. But this was all too easy for us to say, looking in from the outside. The comrades from Turkey were explicitly asking that comrades from different countries come and join them in their protests. What better chance to see what was happening from the inside?

The Turkish comrades chose their audience well. Not only is Germany home to many people of Turkish origin, Kreuzberg is full of Turkish people and leftists, who, it seemed to me, didn’t have much connection to each other, at least in the ‘doing’ of their day-to-day politics. This was a chance to make some more direct links with people in Turkey, perhaps bring us closer to our Turkish/German neighbours in Berlin, and actually offer some practical, international solidarity at the barricades.

The Turkish comrades’ enthusiasm for what was happening in their country filled the room. It was pretty infectious and I remember feeling quite excited at the possibility that it would actually be quite easy for us to go there – the Berlin crowd has a larger share of freedom in the sense that many of us didn’t have 9-5 jobs or family ties. It was near enough to jump on a plane, and not as ‘unknown’ or ‘dangerous’ as countries like Egypt. I think people finally felt that they had the opportunity to be part of a real ‘street movement’, a part of history even, despite the obvious feeling that we were a bit like ‘protest tourists’ or something. These Turkish comrades, who could speak English, had offered us a ‘way-in,’ through their open invitation and offer of assistance once we were there.

On its own though, this wouldn’t have been enough to make me go. What clinched it was the fact that at the time, I was involved in the labournet.tv project [1], which offered a more productive ‘way in’. This is a free, online film archive centred around the theme of labour struggles. If you haven’t come across it already, I recommend you take a look. As well as giving you free access, often with English, German and French subtitles, to many worker-oriented films and documentaries from the past to the present, the collective (it was three women at the time) sometimes makes their own films. [2] We were interested in if and how the labour movement, or workers in general, were related to these kinds of ‘street movements’. We thought this had been a neglected question in the reporting and analysis of much of the previous square/street movements, focused as many of it was on riot porn and insurrection. This invitation gave us the impetus to go to Turkey with this express question in mind, with the idea of interviewing workers there in a series of short films.

So with this focus in mind, and armed with a camera and microphone, we set off for Istanbul. We managed to find ourselves an interpreter through a friend of a friend, and headed off towards Taksim Square. My first impression was disappointment. Upon arriving in Gezi Park, it seemed like a students’ music festival. People were lolling around, having a good time, sharing food and drink and the vibe was convivial. This obviously isn’t a bad thing in and of itself, but rather showed that my ‘movement tourist’ expectations of a ‘confrontation with the state’ were not being fulfilled in the way I had envisaged. It all felt a bit tame. However, over the next days, once we we were able to talk to various groups of workers in the square via the translator, and meet up with some other comrades, we developed more insights into the struggle taking place. I’m glad we had a clear aim in mind (to find out the ‘workers’ content of this movement) because otherwise, it would have been easy to just join in with the nice atmosphere during the daytime, go on some demonstrations in the evening, and then run away when things became more scary with the police as night fell. This wouldn’t have told us much about the content of the movement.

Gezi park had become a central meeting point for all disaffected people across Turkey. Anyone with an existing struggle came there, in the hope of gaining extra support for their cause. While some strikes had happened in the run up to the movement e.g fireman, railway workers and Turkish Airlines, they quickly became isolated due to strong ties between the management and the government. But unionised and non-unionised striking workers used the occupation of Gezi Park to have a presence and make their struggles more public (we spoke to workers from Turkish Airlines and textile workers who had been on strike for over a year), gave them a base and contact with lots of people, which was a way to break through this isolation.

I won’t go into all the ins-and-outs of what we learned while we were there, [3] but you can see the short interviews we made with workers online [4]. As this is a series about ‘internationalism’ and what it could mean, I would just make the following points:

All in all, it was a productive, time-limited experience, despite the limitations that affect all ‘internationalist’ efforts in a time when there is no real communist international! I would never say that people shouldn’t go to other countries because of this though. Any internationalist encounter will, by its nature in these times, be limited in its scope. But knowing the language (or having an interpreter), making local contacts, and some idea of what you want to get out of it are probably the basics to either not feel like a voyeur, or that you’re somehow exploiting the situation for your own ends.

[1] www.labournet.tv
[2] https://en.labournet.tv/ditching-fear-0
https://en.labournet.tv/air-breathe
[3] We also spoke to spokespeople from the more ‘radical’ union movement who shed light on the context of this uprising. We learnt that this movement did not really come out of the blue, but had social roots in a huge strike of tobacco workers at the Tekel factory a couple of years before. Ten thousand workers had marched to Ankara and stayed in in slums for 3 months to fight against a new law that would change their status to contract workers and lower their wages and working conditions, as the state-owned factories were being sold off to private companies. Although it was a defeat for the workers, it was seen as a wider working class movement that sought to extend the struggle to other groups of workers who were in next in line for such contract changes. This was also the point at which the working class support base of the ruling AKP party was starting to be lost. Thousands of workers had joined in protests across ethnic and religious lines, and there was more open criticism of the trade unions. At the time, severe state violence had quelled the protests. The ‘spontaneous’ upsurge in anger during the Gezi Park movement had its roots in these previous developments.
[4] https://en.labournet.tv/6767/gezi-park-movement-2013
https://en.labournet.tv/video/6570/role-workers-struggles-gezi-park-movement

Translation from Passa Palavra —– If there is something worth fighting for in these times of immense difficulty, it is the courage and…

On the ‘Great Resignation’ and ‘Striketober’ – Wildcat no.109

We helped translate this article from the German magazine Wildcat – a useful overview on recent developments in the USA. ‘A systemic intervention…

This is an individual statement of an AngryWorker comrade. We don’t have a collective position on all aspects of the current war and…