As you might have guessed from the name, the ‘Let’sGet Rooted’ network sees ‘local roots’ as one of the most significant preconditions for the rebuilding of an independent, revolutionary, working class organisation. At the same time we emphasise the central importance of working class internationalism. But what does that actually mean beyond well- meaning slogans?

We see various historical and current material reasons for why ‘internationalism’ is essential for the hope of working class emanicpation:

* There is a revolutionary humanist aspect in the sense that no one can be truly free if others are shackled.
* With the development of the global market that has created material interdependence between regions, fundamental social change becomes necessarily international or will be starved and defeated nationally. There is now no part of the world that is not under the control of capital.
* Politically, we can see the result for workers once their so-called leaders (the ‘Labour parties’, the trade unions) tie their fate to the nation state in the form of the massacres of the World Wars. The Russian Revolution in a very backward country was strangled because the efforts of communists to spread the revolution to the industrially advanced countries were opposed by the European social democratic parties and trade unions before Stalin himself abandoned the idea of world revolution.
* Since then, the left has often conflated ‘solidarity with national liberation movements’ and working class internationalism, which leads them to support anti-worker proto-states, such as the Vietcong or the ANC.
* As workers we can be inspired by and learn from struggles overseas  – this is particularly important in the old industrial countries like UK where reformism and welfarism have undermined class consciousness. Everything must be done to encourage the working class in the UK to support in practical ways any part of the global class taking action.
* With the further globalisation of the economy, practical workers’ internationalism becomes a necessity for struggles to be successful in the medium and long-term. ‘Local’ struggles can easily be undermind by capital’s global nature: work can be relocated, local workers can be replaced by new migrant workers.
* The fight for internationalism is also the fight against prejudice and racism here at home. Capitalism is destroying the very conditions for life in many parts of the world and people will have to move in vast numbers. We have to develop a working class movement which supports refugees and turns its anger at the shortage of resources – jobs, housing etc – against capital.
* The global nature of the crisis, in particular the climate crisis, requires a fundamental global change in the way we produce – which can only be brought about by an international class movement. Capitalist globalisation sharpens its own contradictions, e.g. we now have something denied to all previous class uprisings – a means of instant global communication between struggles.

To these ends we want to support the practical international coordinations of workers, e.g. in the form of Amazon workers’ meetings or joint campaigns of Deliveroo or Uber Eats delivery riders. Our local groups aim to help circulate information about relevant struggles worldwide, e.g. amongst Heathrow workers about the global crisis and strikes in aviation.

We also want to build closer ties to comrades and groups who share our political outlook of working class self-emancipation and who are also looking for ways to turn our theoretical understandings of the global nature of the working class into a new political practice.

This is the general background for a new series of articles that we want to write or you to send us. The articles will consist of short reflections of concrete efforts to build ‘international ties’, either in the form of workers’ practical solidarity or political collaboration between comrades – or exploring the tension between both. 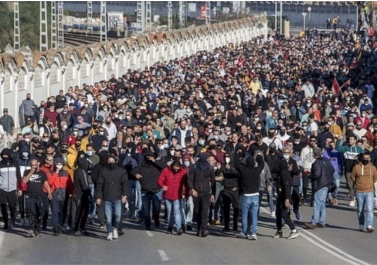 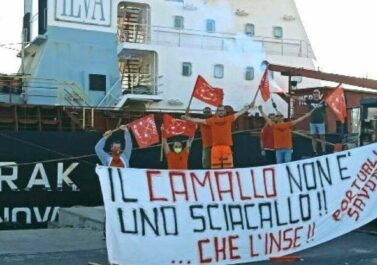