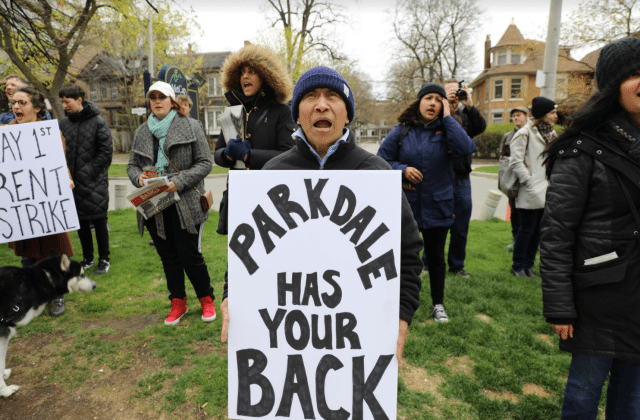 Next up in our series where we ask groups about their organising experiences, is Parkdale Organize in Toronto, Canada. They have been very successful in their ‘territorial organising’ approach, basing themselves in an area and responding to whatever issues working class residents of Parkdale have. This has led to links being made organically to some workplace struggles, as well as solidarity building between different groups e.g. tenants and teachers.

When AngryWorkers moved to west London, we too had the idea of rooting ourselves in a specific area. However, the scale in terms of geography was pretty vast, so we focused on solnets and workplaces instead. We’ve seen a lot of tenants’ organising in London, at its most effective when there is a discrete estate or blocks to focus on. Even here though, there is often a mix of council tenants plus leaseholders (people who own their flats), so finding common cause is not so easy. In our neck of the woods, most people live in privately rented accommodation, which makes collective action very difficult. Recently, in light of the high numbers of rent deferrals during the lockdown, groups like London Renter’s Union have tried to organise nationwide rent strikes. We’re not sure how effective this is when you are so dispersed, have little community support, and can be evicted further down the line, but we hope to hear some reflections of how this went in future.

While tenants’ organising is important, we think that ‘the workplace’ and the question of work in general is the most significant area of struggle when it comes to collective power and social transformation.

We appreciate Parkdale’s efforts so far and their attempts to ‘scale up’ their organising when corona came to town. We look forward to continuing our conversation with them, as well as finding out more about the objective and subjective conditions that have aided them.

We recommend you click on the link mentioned in the article below, which is a great short film about Parkdale and their efforts.

*** Answers from comrades from Parkdale Organize

Based on your recent local experiences of ‘being part of a group’ (organising around a specific issue, reading circle etc.) what were your good and bad experiences? Where did you hit a brick wall in expanding both the practical activity and its roots as well as the political horizon of the group? And where did things work really well and push things forward? In case you are in a group: What is your group’s capacity for practical involvement? Can it commit to run a monthly/fortnightly solnet? Can it maintain a regular (at least monthly) presence at a strategic workplace for a prolonged period?

1.(i) Parkdale Organize’s origin was within a now disbanded anarchist communist organization called Common Cause. We began examining our shared failures over the years with decades of combined experience in multiple left initiatives and the barriers that the left imposes on the development of proletarian struggle. We settled on a course of action for ourselves that can be characterized as “territorial organizing”. This provided us a framework of working class engagement that we hoped would substantially diminish the negative impacts that the radical left has on working class struggle in our region. For the last several years we have focused on a neighbourhood level (territorial) engagement with working class politics as opposed to a focus on discrete sectoral (tenants, workers, immigrants, unemployed, etc…) initiatives. Sectoral struggles still emerge with planning and decision making that represent the nature of those struggles, but the overall framework is understood as being that of the overall working class as it exists and is reproduced within our neighbourhood, and that this overall class interest should be what informs the independent working class organizing taken up in that interest. This was the work we were putting forward to our neighbours and co-workers. As time went on (and successes attributable to this framework and approach increased) this form of organizing became common in Parkdale.

Multiple people from Parkdale that had organized and participated in rent strikes were also part of two separate worker-initiated labour strikes at the Ontario Food Terminal.

A video that covers the beginning of this interplay can be found here: https://www.youtube.com/watch?v=YkzZO5AEcdg

1.(iib)Negatives or difficulties in both of those examples also existed. Generally in situations in which our neighbourhood organizing encroaches on areas in which left or organized labour forces have a presence, there is a political and tactical inertia those forces impose. Organizing in such spaces is extremely difficult for working class organizations to maintain independence.

(iii) Parkdale Organize’s practical capacity is not really directed at programs like solnets or sustained presence outside of strategic workplaces. Though there are definitely similarities with their overall functions and activity in Parkdale. The networks within the neighbourhood are often between organized buildings, and the solidarity emerges from that organizing. More substantially organized buildings often support individuals or smaller groups in their organizing. When a direct action based intervention of those not directly affected (supporting an employee or tenant etc…) is needed, it is generally accomplished by accessing the pre-existing networks of people in the neighbourhood, both members and non-members of Parkdale Organize.

If ‘getting rooted’ means to act within ‘working class areas’ and around ‘interesting workplaces’ and ‘common issues’, what could that mean in your area?

Living in higher density blocks and employment in critical workplaces (either because of the workforce or content of labour). By and large our members all live in apartment buildings in Parkdale. Parkdale Organize has members or contacts employed locally in both of the neighbourhood elementary schools as well as the Ontario Food Terminal.

Are there people you know who are also interested in engaging in a practical / theoretical process like this? If not, why do you think that is?

Very few genuinely want to engage in similar work. This is likely for many reasons. Not least of which is that many leftists and self-avowed revolutionaries are remarkably lazy.

Have there been any interesting struggles within the local class recently? What could a fruitful organised support have looked like?

The most recent example is likely the most substantial. Due to Covid-19 related job losses and expense increases exacerbating an already existing housing crisis, recent estimates of April rent delinquency is at about a third of tenants across Canada. With the most expensive rental markets (when compared to average wages) likely to have larger concentrations of people that did not pay April rent. In mid-March members of Parkdale Organize chose to temporarily suspend our exclusively neighbourhood based focus and attempt to use lessons and resources we had gathered over the years to coalesce a political and practical response to what was likely to be a situation confronting the working class generally, come April 1st. Organizing resources, analysis, and assistance in linking individual tenants in specific districts with one another under conditions of social distancing was taken up initially by Parkdale Organize. This quickly grew in the days leading up to April 1st. Roughly 1,000 new organizer contacts have been shared with neighbours across the city. Those organizers have been postering, establishing whatsapp and text trees in their neighbourhoods and buildings, as well as making phone calls and having personal conversations. All in order to gather active support and contact among people that could not afford April rent to do so with the understanding that if organized, we can defeat landlords’ attempts at repayment and eviction. Success is far from guaranteed, and this organizing is frankly harrowing, but in that non-payment of rent was baked-into this crisis we concluded our experiences could potentially be an asset to other working class people across the city in dealing with the situation collectively. Going into specifics on this would make this long winded shit even more unbearable but an internet link to the bare bones of what we started is here: https://keepyourrent.com/

For an overview of fruitful support by Parkdale Organize in 2017 you can refer to this video about a 3 month long rent strike involving 300+ unit in our neighbourhood: