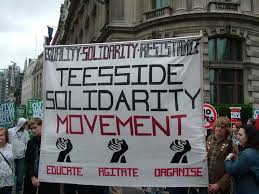 The second in our organisational mini-interview series reflects on the development of the Teesside Solidarity Movement (TSM). The summary in interesting in that it highlights the difficulties that many of us involved in such local groups reach, when there is no political glue or plan as such that holds people together in the longer-term. Such groups often develop out of local campaigns, in this case, anti-cuts, with a varied bunch of people getting involved, all from different political backgrounds and persuasions. People favour different approaches. Questions arise of how to juggle this without loads of in-fighting and people dropping out. How do we maintain a commitment and work programme when the specific campaign ends? In this case, TSM became the outfit from which many other initiatives sprang, albeit the lack of ‘practical anchoring’ and an exodus towards the Corbyn campaign meant it ran out of steam.

In the Let’s Get Rooted Initiative, we have to take these barriers seriously if we want to overcome them. What does it mean to have a ‘practical anchoring’? Our proposal is that community campaigns are short-lived by their very nature, and to give them maximum power at crucial times (often when the council plan to cut some funding or tear something down), there needs to be an existing local force that can materially back it up. This means engaging the local workforce, who are not separate from the local area. This is why we propose to target bigger local workplaces – to share information that might be useful to them; to build contacts; to start building some counter-power territorially. We shouldn’t accept the divisions that are placed on us – that we can only organise through the union at work; that workplace stuff is different from a campaign to save a local library. A local working class response needs to bring different groups of people together. We will never solve peoples’ political differences and approaches simply through ‘discussion’. Only in struggle will a practical solidarity be forged. The most important things are: will we be effective in our actions? will we remain inclusive whilst not bowing to the usual state structures? are we stronger together, or not? The job of a local group is to make sure we push for all these things, link things up, and keep the door open to more radical routes.

Reflections from Teesside Solidarity
Teesside Solidarity Movement (TSM), established in 2013, came to life at a point where the political left, locally was in a poor state, where a local SWP existed, but little beyond this. Occasional mobilisations of several thousands, primarily when relating to anti-war or Palestine Solidarity had occurred. However the feel of decline was, and remains, palpable. Further back a Teesside Socialist Alliance group had stood electoral candidates and produced a news-sheet, ‘Teesside Worker’, which ran to about seven editions and was produced and distributed in the 100s, possibly 1,000s per issue. Until recently, the Labour Party had little visual presence and barely functioning structures concentrated on dishing out positions. Local Trade Union resources, such as the Trade Union Centre acted as a sop, rather than as a workers movement hub.

Marginalised as a poor relation within regional bureaucratic strangulation that privileges Newcastle as a regional capital, Teesside has perhaps suffered disproportionately. Neoliberalism has had a particular impact locally, with Middlesbrough generally featuring as a regular in the bottom 5 when considering various social indices. In general, Redcar and Cleveland and Stockton-on Tees, are little different. Large swathes of industry disappeared and the experience of Teesside building workers constructing the London skyline, rather than their own, and getting the train home from Kings Cross on Friday’s symbolises this.

TSM emerged from a local ‘May Day Initiative’, and established itself as a local anti-austerity group, but one seeking to go beyond the particular cycle of protest at that time. Quite possibly, one of the first organisations to exploit Facebook and social media, initial fortnightly meetings with regular attendances of 20-30 people was relatively dynamic and brought lots of different groups of people together, both political refugees, young people and local bands scene type people. In terms of political composition, there was an uneasy alliance of Trotskyists, anarchists and radical Green types, deciding upon anti-capitalism as an agreed upon definition.

Gigs, Bedroom Tax protests and an energetic and noisy intervention on a local Trade Union May Day march organised a couple hundred people onto a block around our segment of a typical A-B march. TSM becoming an organisation in its own right was uncomfortable for some and especially perhaps those already active in other established (generally Leninist) groups. This tension persisted over whether TSM exists as a distinct (albeit network based) organisation or as something that is more of a flag of convenience or an internet bulletin board. Some activists arguably preferring the latter eventually found activism around People’s Assembly more to their liking. Although not explicitly stated, TSM progressively developed a feel of libertarian socialism and its experimental approach has resulted in a series of further interesting events and actions, although sometimes many things have gone wrong or were not long-lasting. The initial stages of TSM’s development involved participation on a number of council lobbies and other anti-cuts activity and although more noisy, was not really able to do anything much beyond the type of protests organised by established left groups. A choir contrasted to a focus on antifa mobilisations and link up with activists linked to the North East Antifascists/North East Anarchists group, based essentially around Sunderland/Wearside and to a lesser extent the more established anarchist scene in Newcastle.

Coordination with the latter group was effective for a considerable amount of time and Teesside took significant numbers of comrades to national anti-fascist mobilisations. It was equally central in organising counter demonstrations with individuals from the Labour Party (pre-Corbyn) gravitating towards what we were doing. Link ups with various local projects and musicians, such as the Dub Reggae Soundsystem are worth noting and still exist as something to develop further in the future. Developing projects and attempting to expand our capacity and reach was an enduring thread of the story. Some efforts such as the choir, arts collective and local satellite groups failed to make the distance, however a second hand bookshop (Fahrenheit Books), a local anti-fracking group and a project leading to the establishment of a local branch of Unite Community were more longstanding.

The establishment of Teesside Socialist Clothing Bank in 2014 has gone through various incarnations and still exists distributing food and toiletries once a week from the Hub Container in central Middlesbrough, dealing with roughly 50 people weekly. A spin off Teesside Baby Bank has provided for vulnerable young families in particular and a ‘Period of Change’ project has addressed Period Poverty. A joint anti-deportation/no borders work with campaign group Movement For Justice was also established and through developing independent funding from both within our own ranks alongside other sources (radical Christians and others) we were able to fund such projects to the tune of several hundred pounds. Linked to our demo organising and #Art4Action events, we ended up with a large stack of homemade materials (banners, placards) some of which remain at the Clothing Bank hub.

The establishment of Fahrenheit, provided us with a meeting space and potentially a space to develop. However, this became the fiefdom of a particular individual and sadly only lasted for a couple of years. Not developing the project politically and a rather laissez-faire attitude put pay to this. In reality it became a hang out for desperate people and issues such as heroin use in the shop were not treated seriously. Very much a lost possibility. However, we have talked for many years on/off about establishing a social centre. An occupation of the local Trade Union Centre tried to push this issue. Centrally, there is an impulse to create radical working class movements rather than solely intervene in them to gain kudos or recruits. Crudely put, we seek to avoid any parasitic relationship with the cash cow of the official movement.

As already mentioned, TSM’s development owed much to a ruthless exploitation of social media, enabling us to connect with new layers of people. While this had been useful in many respects, ultimately, TSM became synonymous with lots of painful left wing type disagreements, some of which in retrospect were quite informative, others probably more indulgent and reflected incompatible tensions within our network. Not having an established political and practical anchoring was ultimately damaging and led to too much time being spent in esoteric drama and less to practical organising. And here, I think was a major problem. While TSM mushroomed and provided, for a period of time at least, a political presence that had not existed before, it was too often an exhausting distraction.

Touching base with the Palestine Solidarity movement and the Pakistani community was variously successful, but essentially just reproduced social democratic practice with more noise and we did not always make our core politics clear. Other one-off events, such as pickets of Santander with the Solidarity Federation, Rojava Solidarity work, beach parties, outdoors street store work linked to the Clothing Bank, Anarchist Conferences, film nights, gigs all took place and a lot of it was innovative and trying to do the right thing. Fortnightly meetings provided a degree of political education. Over the initial period of TSM’s initial history, several hundred different people attended events.

Attempts to link up with other groups in the country, essentially came to nothing and since 2016, the Corbyn wave, essentially put an end to much of the operation. Too much relied on too few people and although sprinkled with good intentions, it was too ad-hoc and not strategic enough. The desire to be embracing to a wide spectrum blunted the development of a core working class politics/practice. There was a lot of time spent on ideas of the people who would attend meetings, but not so much to the hard graft and mistakes were made, usually involving our trying to do too much. We learned a lot but clearly we needed to go a lot further: be more focused on the future and seek to build social power in working class communities more than indulge in the exhausting merry-go- round of more normative left-wing politics.

Most of the comrades still around will be able to add to this and hopefully thinking back, this reflection might act as a prompt when we consider WTF we do next.