We’ve entered the culture war and would like to thank the London Arts Council and Momentum’s ‘Activist Art for Socialist Realism’-Fund for the financial support. We would also like to thank Tesco for three years of employment and the ‘Driver Handbook’ that we subversively deconstructed for our collage. Thank you.

Most of the fellow workers are post-colonial or EU neo-colonial subjects (Hardie, 2006) and right old blockheads. Tesco has to give them some good lecturing in emotional labour and caring skills. In the end we are all up-rooted and pasted into unknown environs, where we have to pick up the right social clues and shopping trays.

The ‘Driver Handbook’ helps us with the following scenarios:

But then we would not be AngryWorkers if we were interested in the liberal arts and corporate propaganda. We start with Tronti, and how he started: “Let’s start by saying Lenin!” (Tronti, 1964) “Cominciamo a dire Lenin”.

Now we’ve got that off our chest, let’s talk reproduction, because the private shopper is political!

What the corporate Handbook doesn’t show is the unpredictable nature of our job.

Where you might get swept up in situations (Debord, 1963) beyond your comfort zone.

And feel like a trite copy of Forrest Gump.

Or a copy of the copy.

And then the unpredictability of customers.

And of their co-habitants – health and safety risks never mentioned.

Still, we can be proud to serve the people.

(And when you thought the level couldn’t get any worse)

And we often feel that we end up back where we started… it’s a rat race, brothers and sisters! 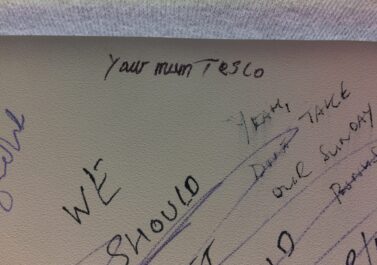 Can the subaltern write? – A photo study of elegies on commercial van sunshields

Company property is defaced and its function altered, we might say re-appropriated (Marx, 1868). We would like to thank SOASS for their funding…

Sisters and brothers, Here are some photos collected over three and a half years working as a delivery driver and loader in west… 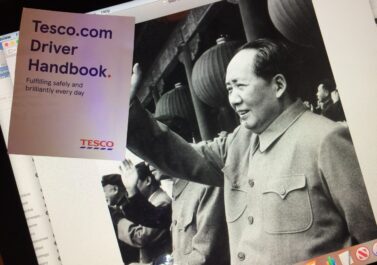 “This is so 1980s. This is not even funny” Hannah Aren’t Hello comrades, We’ve entered the culture war and would like to thank…