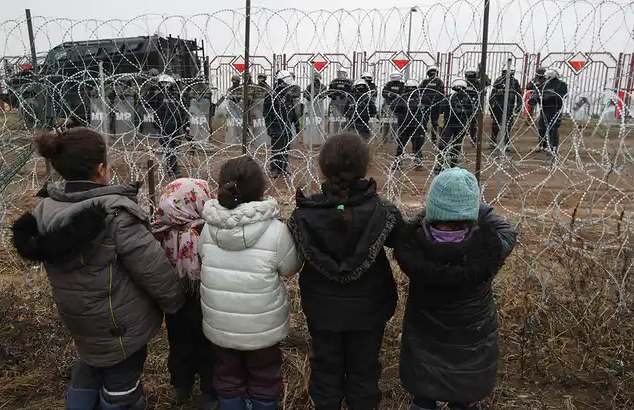 (This text was written a few days before the most recent tragedy in the Channel, during which 27 people drowned)

Syrian man found dead on Polish side of border with Belarus
Polish police say cause of death not determined after body discovered in woods near village of Wolka Terechowska.
“A forest worker informed the police about finding the body of a young man,” Tomasz Krupa, a Podlaska police spokesman, told Reuters.
“It is a young man of Syrian nationality around 20 years old,” Krupa said. It was not possible to determine the cause of death at the scene, he added.
At least nine people are reported to have died in the migration.

Death and misery has returned to an area of Europe which was the scene of unimaginable slaughter and destruction during the two 20th century imperialist bloodbaths. Today, the imperialist rivalries remain at a level of hostage taking, cyber attacks, altering the flow of resources, building alliances and eroding the opponents’ blocs and so on. The immediate trigger for the horrors in Eastern Europe has been the decision by the Belarus state to tempt refugees to fly to the capital Minsk from where they are moved to the border areas with Poland, Lithuania or Latvia – all part of “Fortress Europe”. The thousands of refugees already at or heading for the border between Belarus (an ally of Russia) and the states in the European Union (also part of NATO and the EU’s own military arrangements) are the pawns in the game of world capitalism in crisis.

Those are the particular features behind that hell hole but across the world desperation forces migration. In the deepening horrors of the 21st century, wars without end, ecological disasters and the absence of any hope of adequate paid work all overlap to make starvation, at whatever tempo, the only alternative.
Our siblings drown in the English Channel or Mediterranean, they suffocate in sealed lorries, have their primitive settlements and shacks destroyed and are beaten or worse by the state forces. Their possessions and money are sucked away by the “people traffickers”, now including the travel operators and airlines who flew desperate people to Minsk. Many of those who reach their “promised land” are enslaved by the gangs who robbed their money, gambled with their lives and still brutally control them and their family members that stayed behind.

For the bosses, we’re all “It”s of this or that nationality fit to be transported, trapped and tormented according to the whims of capital. Despite the systems of production and exchange having spanned the world for more than 100 years, it suits the bosses to keep their national states and to exercise their strength and control in each area.
In the case of the atrocities at the borders of Belarus it is poisonous for us to try and argue in favour of one set of state gangsters or another. The delusions of “national identity” and support for “our” national state and borders have always meant death and suffering for workers. Lest we forget!