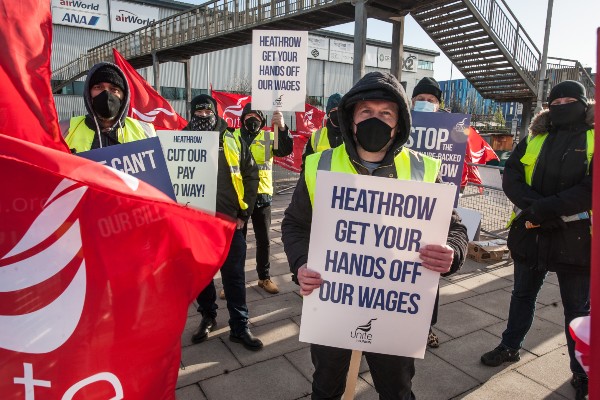 “We’re all going through the same. We should all walk out. Everyone in Unite. All over the airport.”  – Heathrow striker.

On 14th December Heathrow Airport Limited (HAL) workers had the second of their four scheduled strikes against the companies forced changes to their contracts. On the day, we went along to support the strikers on the picket lines, to speak with workers at transit hubs and have a look at what was going on at the car protest congregating at Bedfont Football Club.

Workers talked to us about HAL’s assertion that a large chunk of the workforce on the newer contracts were actually getting a pay rise under the proposed changes. They told us that the ‘pay rise’ would be short-term because while they would get more pay at the start, the annual increments they used to get would be cut. Many workers on the newer contracts (around 60% of the total workforce) still voted to strike because they worked out that in the medium term, they would actually be losing money, as they would be stuck on the same rates of pay. They voted to strike because they could see through this sleight of hand and voted to strike even though they were getting an “increase.” We also spoke to striking workers that voted to strike although they were getting a “pay rise” now, because it was being paid for by robbing their workmates. We need to be prepared for these tactics. This is textbook stuff. We need to learn from these experiences and remember them for the future. Bosses will always rob us while insisting they are doing us a favour and do anything they can to undermine our bargaining power.

Airside Safety workers talked about HAL training up other workers, probably management, to do the basics of their jobs and undermine the strike as part of their contingency plans. There are in total around 60 workers in the department on each shift. If all of these workers, responsible for clearing the runways from spillages and debris, would walk out, the airport operation would stop. As well as management training scabs, the problem is that as many as half of the workers in their department are not in Unite. The rest are in Prospect and PCS. Too many unions, not enough unity. Although these unions did apparently ballot their members, they failed to vote to strike. They also mentioned that their job of clearing the runway has become increasingly dangerous, as at least until recently there was less and less time between flights. If workers were better organised, could even their partial absence be an opportunity for other workers to refuse to work on health and safety grounds? Many other ways of stopping work due to H&S situations like this, could be open to a workforce that is prepared and ready to take meaningful industrial action.

A big issue within the dispute is the removal of the abatement clauses in staffs contracts. This clause stated that if HAL made a worker above a certain age redundant the company would have to pay out their pension early. This was good protection against unnecessary redundancies. Workers suspicions have now been proved correct as now the new contracts have been imposed, without the abatement clauses, HAL is beginning make staff redundant they probably wouldn’t have with the clause still in place.

A striking worker we spoke to was frustrated at how long the dispute has dragged on before they have been able to strike. And like ourselves, wonders what should/could have been done in the lead up to the strike ballot. The striker said the companies intentions were clear at the start, “they knew what they wanted to do.” But unions are constrained by appearing reasonable at the negotiating table and jumping through the legal hoops required to get to industrial action. What other forms of direct action could be deployed, to apply pressure sooner in our disputes?

A rep we spoke to talked about how the pandemic has effected their ability to organise and communicate with the members. He said that although they couldn’t get together in large groups, in person, he said they probably managed to get more in one place than they would otherwise have been able to via Zoom. He did say that there is a drop in the quality of the meeting but it was good to have so many staff “connected.” Communication is key in these disputes. Online meetings may be a helpful tool for us in the future, but they also have major drawbacks. More than one worker we spoke to talked about feeling isolated when the decision of whether to sign the new contract or not, presented itself. They were advised not to sign, but it is an extremely tough call to make when you are unsure what everyone else is doing. Mass, in person, meetings are possibly irreplaceable for this. Physically being present when all your fellow workers openly commit to an action, is a lot more reassuring than hearsay or assertions on Teams. If the pandemic lingers on we’re going to have to think of solutions. And we shouldn’t just leave it to the reps and union leadership to figure out. Workers need to talk, plan and strategise if we’re going to achieve our aims.

We had an interesting conversation with a Terminals Security worker at Central Bus Station. Terminals Security did not vote to strike. This worker was furious his fellow workers didn’t vote to strike. He said this would have made the strike so much more successful. He will be losing £5000 and couldn’t explain why his department didn’t vote to strike. This contradicted what we’d heard the previous week when a rep told us that Terminal Security staff had actually been given a pay uplift.He felt disappointed that workers didn’t stick together more. He said some people just haven’t got the guts for it. But also said some workers talk about being let down by the union in the past. We spoke about unions not doing themselves any favours sometimes and he blamed this on the leadership. He said they don’t listen to the reps on the ground and just go off and do their own thing. We heard at the previous strike (1st Dec) that Terminals Security were given a better deal than other departments, but this worker wasn’t aware of it. A Campus Security worker on the pickets suggested that Terminals Security didn’t vote to strike because there is far more new starters that aren’t as adversely effected as longer serving staff.

Whatever the reason, the absence of Terminals Security and many other workers from the strike is a big problem. We spoke to contractors at the Bus station (Menzies and others) that didn’t even know a strike was happening. “What strike, everyone is working…..” The flight schedules in the morning of the strike recorded no disruptions to takeoffs or landings. Other media sources also declared no disruption at the airport. A rep we spoke to says this was partly due to Heathrow rearranging flights when the strikes were announced, so as to avoid cancelled flights on the boards. However much disruption the strike did cause, it appears clear that it needs to be a great deal more.

Everyone we spoke to was aware that BA Cargo had voted to strike and set dates over the Christmas period. Everyone was also keen to find ways of linking the struggles up. They sympathised heavily with the Cargo workers stating they were aware of extra work they were taking on recently, operating the bridges that used to be done by the turn-around crews. They also appreciated that, like themselves, they were being treated with utter contempt and disrespect. Workers also liked the idea of a solidarity action to support the Rolls-Royce workers at Barnoldswick. There is sites around Heathrow that could be targeted.

We would also ask how do we make sure these acts of solidarity aren’t just symbolic. That they aren’t just protests that powerful folk can easily ignore. The car protest on the 14th Dec being a prime example of a symbolic, easily ignorable action. Speeches from MPs and calls on government for help can’t be the solution. Workers planning and carrying out actions that really make the bosses sweat, is the only thing that has ever achieved meaningful positive change. And it’s the only thing likely to get us out of these constant defensive battles and onto the front foot. We’ve heard, in a great many disputes recently, union officials saying that “we’re hoping the company bosses, come to their senses, and do the right thing…” As if we are dealing with decent moral humans, that just need to realise they aren’t being “fair.” We are not. We are dealing with companies that seek to maximise profits and market share above everything. Remaining aware of this will enable us to focus more clearly on the type of tactics and strategies that will help us achieve our goals. If we ever wish to have the dignity and respect that comes from controlling our daily lives, we will need start by controlling and changing the way we struggle. Heathrow Workers Power is creating a space where the discussions necessary to make this change can happen. If you like where we’re coming from and want get involved, get in touch. 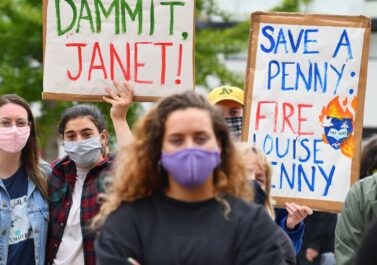