The CWU doesn’t call a strike, but posties fight back.

On Friday 5th of May, the CWU leadership agreed to Royal Mail’s end to Saturday deliveries, which threatens 20,000 jobs. Royal Mail claims that this will be a temporary measure, and the union is taking their word for it. But do postal workers trust the words of CEO Rico and his mates?

This comes after the CWU called off strike action in March, saying it ‘​was the right thing to do for our nation,’ despite a 94.5% vote in favour of strike action.​ Is this a good strategy?​ Was it a clever move to win public support, or did it open the door to attacks by Royal Mail management? ​We want to hear your thoughts.

The union leadership held a livestream over the weekend to explain it’s position. Many postal workers had their say underneath. Here are some of the comments:

“Let’s see how this works out, bet in 3 months time we’ll still not be delivering letters on a

Saturday. What danger is there that the wool is being pulled over your eyes?”

“W​ ell done guys as usual. Proving if we all stand behind our union results speak for themselves.”

“Fed up being kicked in the Town Halls let’s use our 94.5% now before the rug gets pulled

How do postal workers in Croydon feel about the latest developments?

While the CWU did not call a strike in response to this latest attack, it did instruct workers to “​continue to adhere to their currently agreed duty/attendance arrangements” which is “​“​In defiance of the company’s unilateral action.”

This meant that the response was left to the rank and file, who are always more up for a fight than union leaderships are. Reports online suggest that unofficial action took place in several locations in the days following Royal Mail’s insulting announcement on the eve of National Postal Workers Day, and that the threat of a nationwide unofficial walkout was on the cards.

In response to this, management appeared to make some concessions. They stated in writing that the removal of Saturday deliveries would be a temporary measure of 6 weeks, reviewed every 2 weeks. They also said that shift changes would be voluntary and would have to be agreed with reps. But are these statements trustworthy? And are they a win for the CWU or a climbdown?

Postal worker’s next actions will depend on how far they trust Royal Mail’s claims on this being a temporary measure. In the background is Rico’s big drive to increase profitability at Royal Mail, which is of course just another way of saying that postal workers are going to be squeezed harder.

Another key question is whether the CWU can be trusted to put up a fight without pressure from below. Only posties can judge that. But whilst the union bureaucracy might be sluggish, postal workers are strong. Recent weeks have seen multiple wildcat strikes around PPE across the UK by postal workers, and also in other industries. This is part of a global trend that has also seen Amazon workers wildcatting for safer working conditions and winning through the action they took.

If postal workers are worried about these developments and want to make sure that the Saturday deliveries return after six weeks, then they should consider the following. 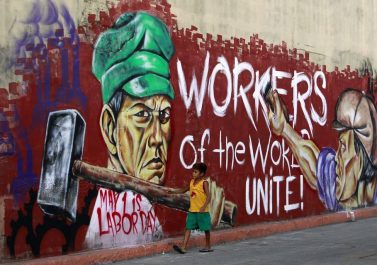