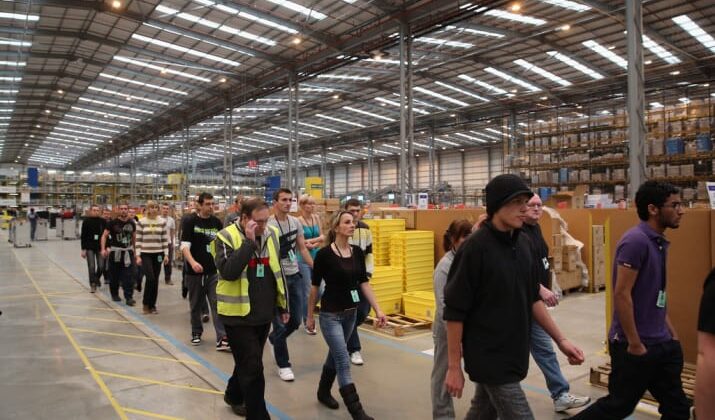 Amazon workers in Hemel Hempstead and Amazon Flex workers in West London: Let‘s learn from the struggles of our colleagues in Italy, Germany and Poland!

It‘s peak season and work sucks the life out of us. The media presents us as victims, losing the competition with Amazon‘s robots. That sucks too. We can show them that we are no victims.

In Hemel Hempstead we have many problems:

* The picking target of 120 is too high, and it‘s raining verbal and written warnings. Management makes temp workers hit higher targets for the season, and then makes the regulars reach those targets throughout the whole year. ‘Power Hour’?! – No, thanks!

* PMP and Adecco pay low. They advertise £10 an hour, but you have to kill yourself with overtime to get it. Some guys work 60 hours plus. The more hours we work per week the less they have to pay per hour. We spend at least one hour unpaid per week waiting to get through security.

* Amazon, Adecco and PMP leave it up to the last minute to tell the temps when they are fired again.

* Some temps are given blue badges to look good.

Driving for Amazon Flex in West London ain’t so fun either:

* The shifts per week are not guaranteed, often we make hardly enough and have to choose between food or petrol.

* £52 for a 4-hour block doesn‘t leave much for us, once you reduce all the costs for the car, possible repairs, the risk of accidents or not being able to work, e.g. due to illness.

* They pile more and more parcels onto drivers and give you a hard time if you bring them back when you run out of time.

Drivers and warehouse workers should get together, discuss a list of demands and take steps to lower stress at work. This is not impossible, other workers have done it:

* In London, university cleaners – all of them migrants like most of us – went on strike for the London Living Wage of £10.20 and for sick pay and were successful. https://www.uvwunion.org.uk/

* In West London migrant workers of a sandwich factory wrote down a list of demands and collected around 100 signatures from colleagues. Dozens of them stopped working when management didn‘t give them an extra break during overtime

These seem like small steps, but they can create the basis for bigger steps, like those of Amazon workers in Poland, Germany, Italy and France.

* Last month, on Black Friday, over half of permanent staff at the largest Amazon FC in Italy went on strike for the first time. Some temp workers (half working for Adecco) also ditched the fear and came on strike. They are asking for higher wages, better conditions and permanent contracts for all.

On the same day, workers at six FCs in Germany went on strike to support the Italians and ask for better pay and conditions. Amazon workers in Germany have a longer history of struggle, but the problem is that permanent and temp workers often don‘t struggle together. Wages in Germany and France are higher than in the UK, while working times are shorter.

* In Poznan (Poland), the biggest Amazon FC in Europe was set up to undermine workers in Germany, who have been on strike several times. When Poznan workers formed their own independent union, Amazon management started paying them higher wages and improved working conditions, because they see workers‘ power. https://amworkers.wordpress.com

The best thing is that workers from all these countries started to organise meetings together. They compare their conditions and discuss how they can fight together.

We want to invite you to meet and talk about the conditions here. If you are interested we get you in touch with Amazon workers from other FCs.

If you are a temp and live and work in West London area, we have regular meetings to support each other with problems at work, with landlords or the job centre.

If you need further support you can always contact the independent union IWW, we will always be of help.